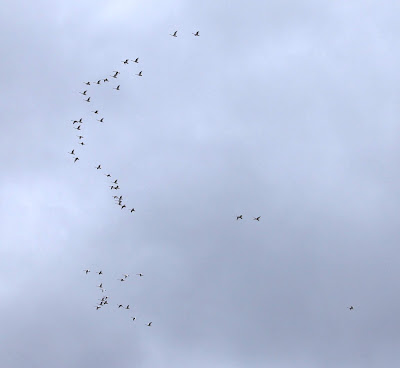 Leeshaw Reservoir
An afternoon visit produced the following:
276 Greylag Geese, 113 Canada Geese, 84 Golden Plover, 33 Curlew, 15 Oystercatcher, several Lapwings, about 300 Starlings, a flock of about 100 Fieldfares and Redwings (75% Fieldfares), a pair of Teal, a pair of Goosander and three Herring Gulls. 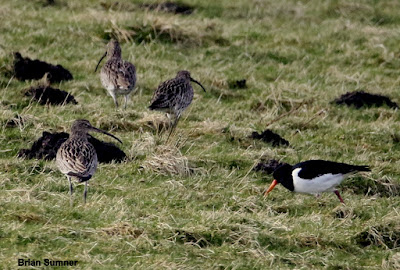 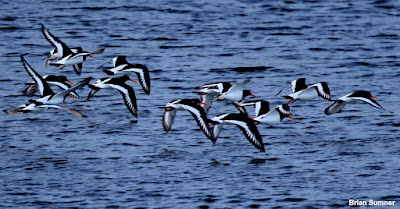 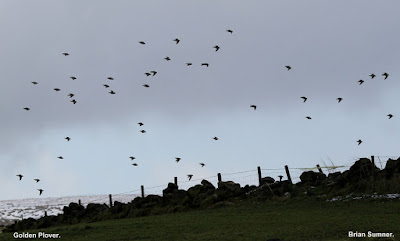 Crossflatts station
9am - A flock of Waxwings were still present feeding on hawthorn berries by the down platform exit.
12.30pm - 10 Waxwings and three Redwings were present. 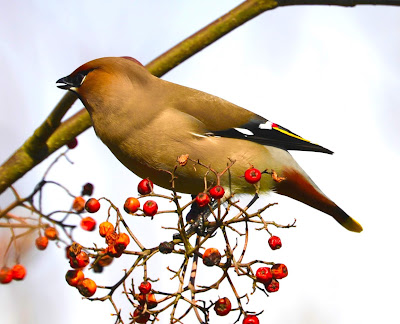 Crossflatts Railway Station - at 16.00 a flock of 15 Waxwings feeding on berries. Not many berries left, the trees next to the car park. There are some more berries at the grammar school nearby.
Shaun Radcliffe

Yeadon Tarn
Five Pochards (four males and a female), a male Shoveler and a pair of Goosander.
Andy Jowett 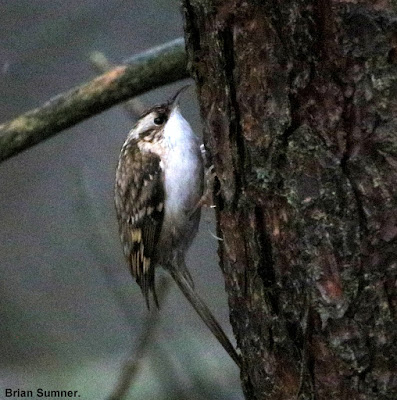 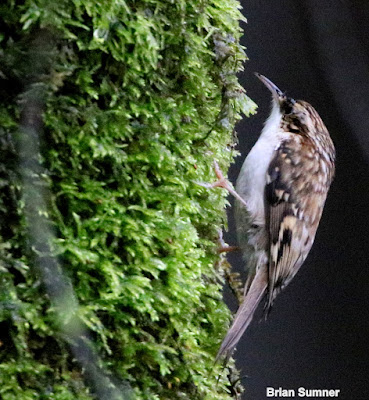 Heights Lane & Eldwick Reservoir
A flock of seven Long-tailed Tits, a Little Owl, five Curlews, a male Merlin, a Kestrel, an Oystercatcher, six Fieldfares and both Song and Mistle Thrush were seen in the area.

photos and report from Phil Matthews.

Leeshaw Reservoir
In the afternoon gale there was a good movement westwards.  These consisted of 68 Curlew (two present), 248 Lapwing (several present) and 59 Oystercatchers (12 present). 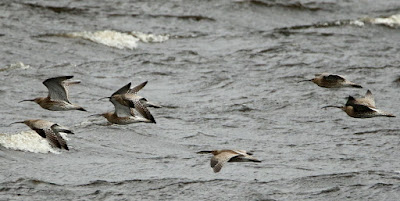 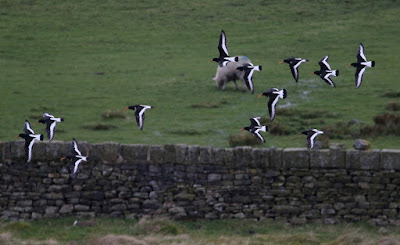 Photos showing the movement of Curlews and Oystercatchers at Leeshaw.
More can be seen on Brian's blog.

Leeshaw Reservoir
18 Golden Plovers in field with about 40 Lapwings.  Nine separate Curlews flew west in addition to two present.  There were 8 Oystercatchers and a flock of 150 Fieldfares.  Lesser Black-backed Gulls and Herring Gulls were also in the area.

East Morton
At Street Lane (Whetstone turn off) - about 50 Brambling in the area of trees and bushes.
Theo Kuechel

Waxwings in Keighley
The Waxwings at the top of Westfell Lane have been giving excellent views.

Keighley (Westfell Road)
15 Waxwing still present at Westfell Road and were seen most of the day even in poor conditions.
Steve Parkes
Riddlesden Garden
Pair of Brambling
M Doveston

Wagon Lane stretch of River Aire - with the river in flood, 70 Pied Wagtails counted on the rugby pitches plus 2 Oystercatchers & a pair of Goosanders sitting it out.
Shaun Radcliffe

Keighley (Westfell Road)
The flock of 15 Waxwings have been seen throughout the day in Westfell Road, Keighley. 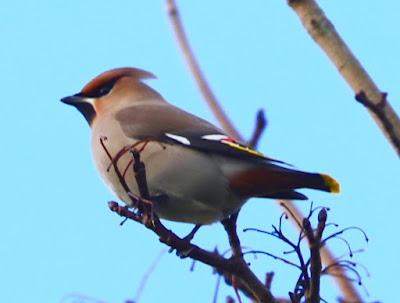 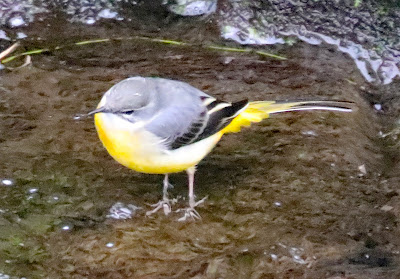 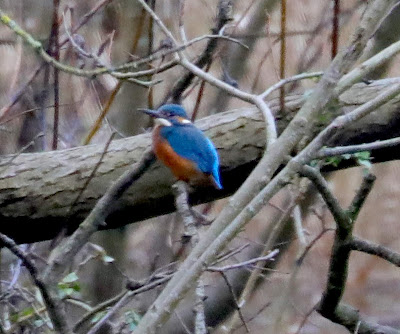 Apperley Bridge to Esholt
A couple of Oystercatchers have returned to the area, three Mistle Thrushes were singing, a pair of Bullfinch and over 25 Goldfinch were seen whilst a Sparrowhawk spooked a flock of Long-tailed Tits.  The high winds have disrupted Rooks and their nest building attempts, but a couple of Jays and a Heron were feeding and a Teal could be heard.
Damian Pearson

Keighley
A flock of 16 Waxwings were reported at the top of Westfell Road.
What's App

This winter, Blackcaps have been reported visiting gardens in our recording area, particularly in Wharfedale and Airedale.  The BTO have an explanation which you may find interesting. Click here. 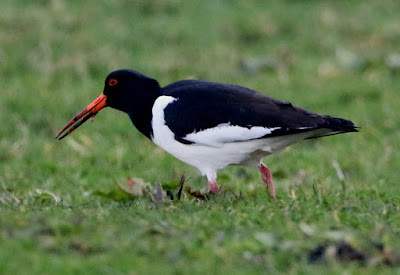 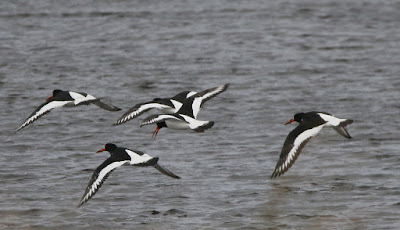 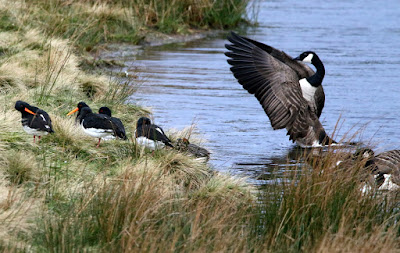 Glovershaw
In Golcar Fields and surrounding moorland there were 50+ Fieldfares, over 50 Lapwings, a Curlew and six Reed Buntings.  150 Greylags had been joined by three Canada Geese and a Red Kite and a Common Buzzard flew over.
Steve Meredith

Dowley Gap
50 to 60 Pied Wagtails, 20 Magpies and four Goldcrest in bushes, seen from the aqueduct
River at Hirstwood
Two pairs of Goosander, a pair of Grey Wagtail, 40 Greylags and 38 Canada Geese.
Shipley Glen
A pair of Dippers on the beck.
Paul King 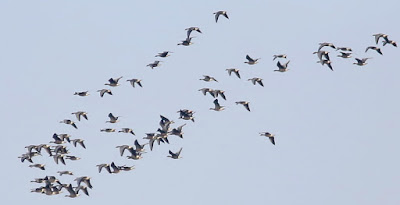 Hope Hill, Baildon Moor
A flock of 40 Golden Plovers flew over and two Skylarks and a single Lapwing were new arrivals.  Four Tree Sparrows were visible in the hedges around Dobrudden Farm.
Paul King 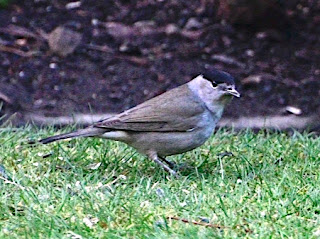 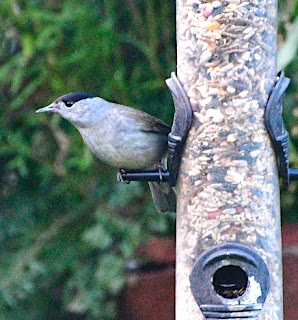 Photos and sighting from Alison Bennett

Otley
A female Blackcap feeding on a fat ball in the garden.
Theo Kuechel

Low Snowdon - flock of 50 ground feeding Fieldfare
Denton - 130 Curlew flock plus another 80 birds in a nearby flooded field.
Shaun Radcliffe

Strid Wood
A mixed flock of Brambling and Chaffinch remain in the area between the Strid and the stone shelter.
John Brooks

Redcar Tarn, Keighley
Both Caspian Gulls and the Iceland Gull were at the Tarn, as well as this splendid adult Yellow-legged Gull.
The Iceland Gull was also at Cullingworth Fields on the 29th (there is nothing to suggest it was a different bird).
Keith Moir