Wishing everybody all the best birding for 2019.

Stockbridge Reserve (members only) - Little Grebe catching sticklebacks, Water Rail heard only, small flock of 6 Siskin, 4 Reed Bunting plus sadly a dead male Goosander lying on one of the islands. It may have struck a power cable overhead.
Shaun Radcliffe

Wishing all birdwatchers a belated Happy Christmas. All the best for 2019.

CATCH UP due to computer problems

Dowley Gap
Three Chiffchaffs at Dowley Gap Sewage Works.  Two were together on the fence overlooking the works whilst another searched for food close to the aquaduct. 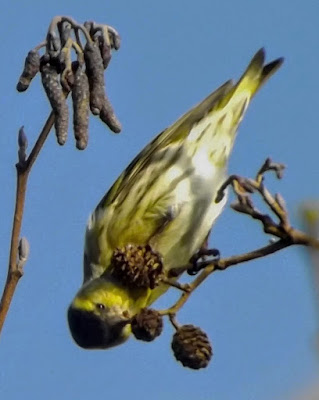 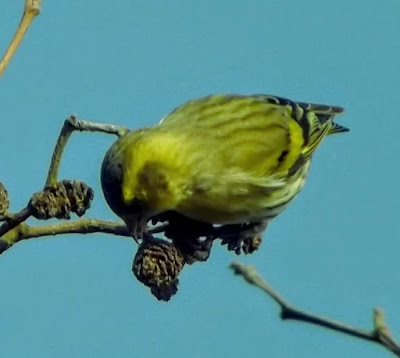 Oxenhope - Marsh Lane
A Brent Goose is with a flock of 100 Canada Geese.
Brian Vickers

Fewston Reservoir - at the top end, feeding on Alders, 50 Siskin. This is a very reliable spot to see this species here
Roger Nelson

Baildon Moor
A flock of at least 10 resident Tree Sparrows at Dobrudden Farm.  Lower down, adjacent to Glovershaw Lane, a flock of 26 Red Grouse flew onto a bilberry patch.  Both record numbers for this area.
Paul King.

Haworth
A skein of over 120 Pick-footed Geese flying NW at 13:00.
Howard Creber

Cullingworth
A Red Kite over the village.
David Ogden

Shipley Glen
A roost of 16 Grey Herons in a field at the bottom of the Glen.  This is the largest group I've seen here for many years.  A Kingfisher was at the dam, a Dipper flew up the beck and a pair of Great Spotted Woodpeckers were chasing each other in trees at Milnerfields.
Paul King. 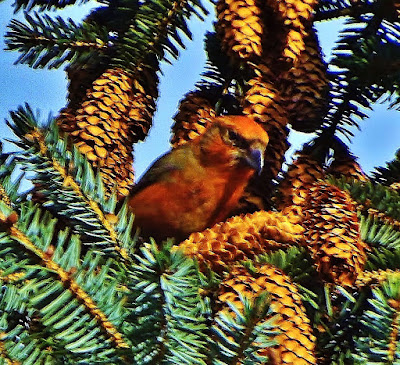 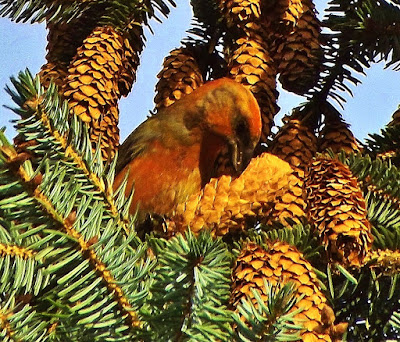 Stockbridge Reserve (members only) - two male Goosanders & a female on the water. During gales, a male Wigeon flew in but stayed for only five minutes. Up to 5 Reed Buntings came to the feeders, a few Redwing flew over as did a Cormorant. A Sparrowhawk drifted by.
Shaun Radcliffe

Queensbury garden - amongst a flock of 25 Chaffinch, a male has been ringed in Norway.
Denise & Colin Shields

Stockbridge Reserve (members only) - a Water Rail swam below the willows whilst another called from the reedbed. Also seen - 2 Siskin, 5 Reed Bunting, Sparrowhawk with Goosanders flying up and down the river.
Shaun Radcliffe 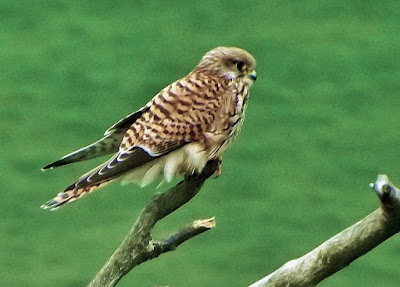 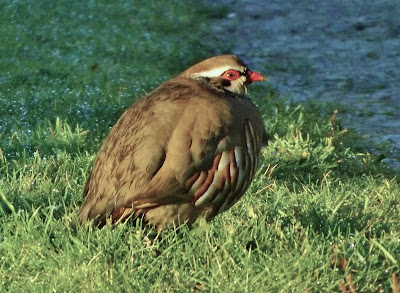 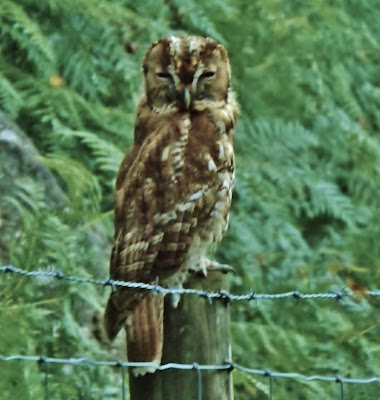 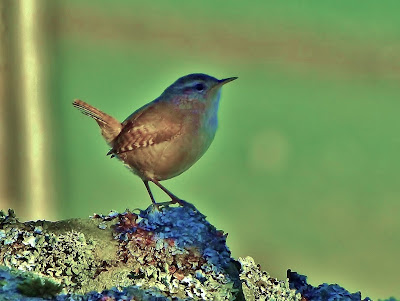 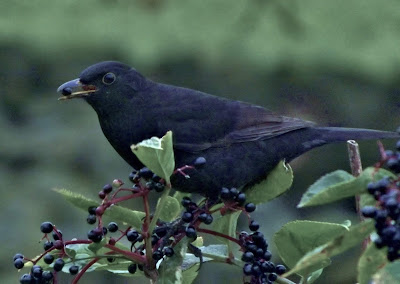 On the dam wall between Fewston & Swinsty Reservoirs - single Snow Bunting being chased by a Pied Wagtail. 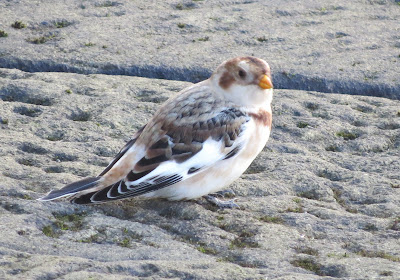 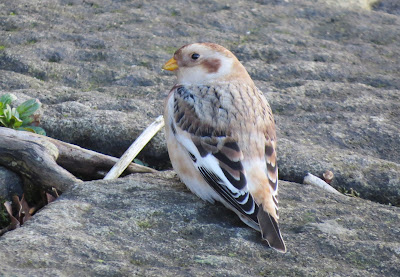 
Thursday 25th October: Swinsty/Fewston reservoirs
Common Crossbill: 2 flocks; about 20 birds around the main car park, and a small flock by Fewston. Those birds I saw well were Commons, although always possibility of other species in with them!
Redpolls: seem to be plenty around, a couple of sizable flocks seen. Only seen in flight; presumably mostly / all Lessers, but comments as above for Crossbills!
Siskin: one aerial flock seen, plus a few other odd birds around
Brambling: single bird in flight by Fewston, plus prob others heard
Fieldfare: 15-20 in flight Swinsty.

Other birds around incl Pink-footed Goose (heard, but couldn't be seen; I think a single bird was grounded out of sight on Fewston), Common Buzzard, Red Kite, Sparrowhawk, Great Spotted Woodpecker, Mistle Thrush, Goldcrest, Jay and Nuthatch.  Plus Gareth Southgate out for a run!!
John Armstrong

Glovershaw
A family of five Stonechats hunting from the wall through Golcar Fields.  A flock of seven Fieldfare flew over and a Snipe was flushed from the area alongside the Golf Course.
Paul King

Shipley Glen
The escaped Harris Hawk, last seen here in February, was flying over the Glen at noon, pursued by about 20 Jackdaws.
Paul King

Shipley Glen
A skein of 60+ Pink-footed Geese travelled east at 9am.
Paul King

Woodside, South Bradford - this morning, a  flock of 80-90 Pinkfoot flew over.
Jamie Brass

Shipley Glen
A flock of 40 to 50 Pink-footed Geese came from the east and flew northwards at 5pm.  They may have been looking for a roost as conditions were wet and misty.
Paul King

Glovershaw
Three Wheatears near Golcar Farm and a Wheatear on the Golf Course.
Paul King. 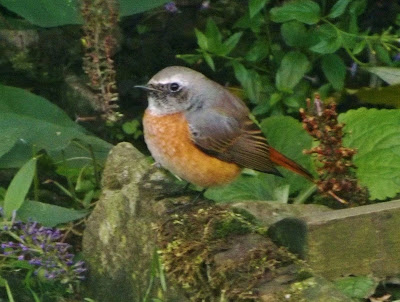 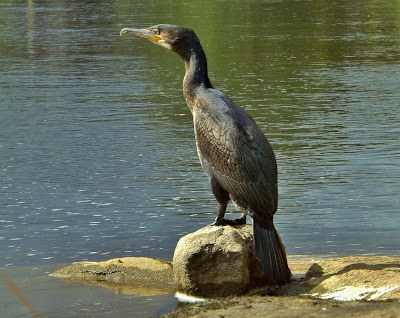 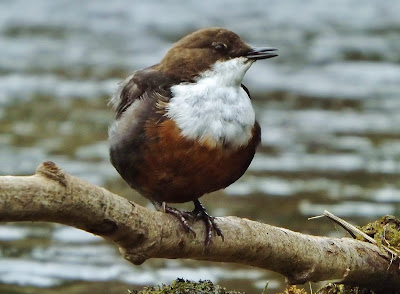 Stockbridge Reserve (members only) - a Little Egret landed this morning and stayed about 30 seconds before flying off up the valley.
John Preshaw & Shaun Radcliffe

Glovershaw
Another family party of Whinchats, this time four birds, were feeding for most of the day in the fields by Golcar Farm.
Paul King

Glovershaw
This pm - A family of 6 Whinchats (2 adults and 4 juveniles) hunting from the fence that runs across Golcar Farm fields.
Paul King

Glovershaw
Two Whinchats, a Whitethroat and a flock of 15 Greenfinch in the Golcar Farm area.
Paul King

Glovershaw
A male Redstart on the wall by Golcar Fields. In the fields nearby a family of seven Grey Partridge.
Paul King

Glovershaw
9am.  A Whinchat, a Wheatear and two Whitethroats were feeding the area near the "gallops" and the 11th green.
Paul King

Shipley Glen
Seven Grey Herons roosting in field at the bottom of the Glen.
Paul King

Baildon Moor
Two Barn Owl boxes, in which young owls have fledged, have been vandalised over the weekend.
Paul King 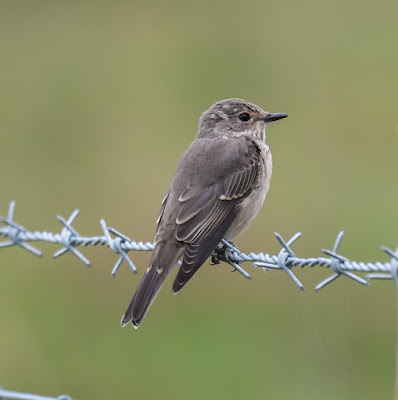 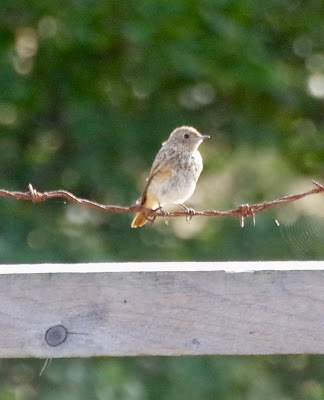 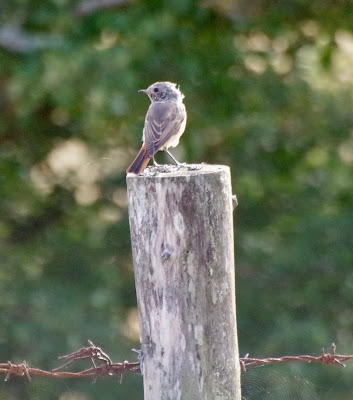 Glovershaw
A Wheatear on the Golf Course and a family of five Kestrels feeding over the area.
Paul King

Glovershaw
A Grasshopper Warbler can be seen and heard singing from bracken close by the "cabins" to the north of Pennithorn Hall.
Paul King 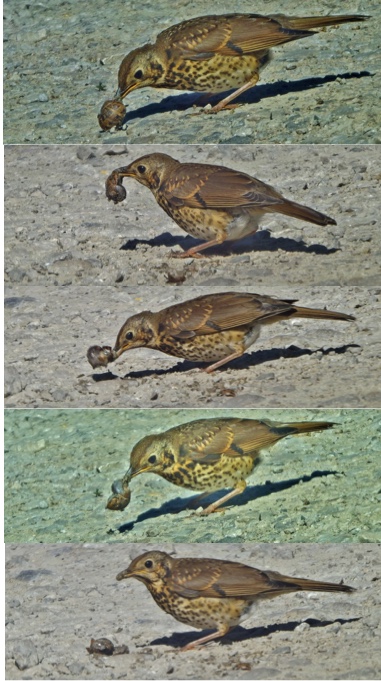 How to extract a snail, a juvenile Song Thrush demonstrates the process.    photos: Roger Nelson

Pennithorn, Baildon
The male Redstart, first seen two days ago, was again by the "cabins".  An adult Little Owl and juvenile was by the 'old barn' and a Whitethroat was seen in a bramble patch.
Paul King.

Pennithorn, Baildon
A male Redstart was feeding by the cabins this morning and a male Great Spotted Woodpecker was also in the trees.
Paul King 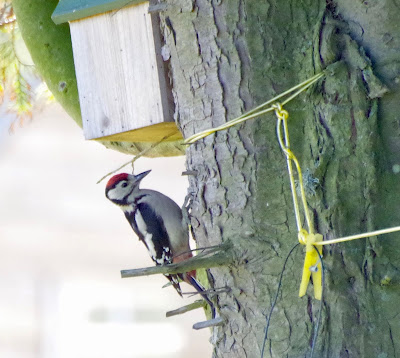 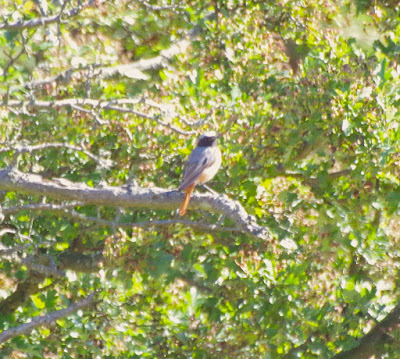 Storiths - pair of nesting Spotted Flycatchers. There would appear to be less of this species this year.
Photos and sightings from Roger Nelson 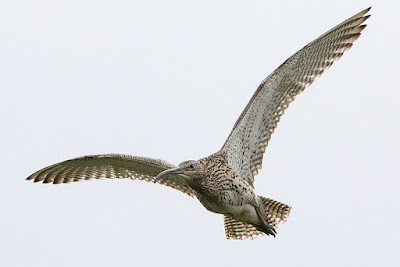 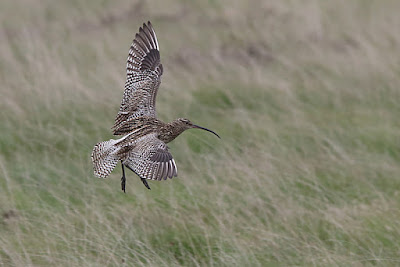 Hazlewood - 3 Cuckoos (presumably 2 males chasing a female|). One bird had a stutter in its call.
Roger Nelson
Other scenes from Upper Wharfedale

Glovershaw
A Grasshopper Warbler was singing from the top of bramble patch on the Glen Road.
Sconce/Pennithorne
Whitethroat singing and three or four pairs of Willow Warblers are actively feeding in an area close to the scout camp.  Other breeding birds seen carrying food included Reed Buntings, Meadow Pipit, Skylark and Linnet.  A Little Owl was seen by the cabins.
Paul King